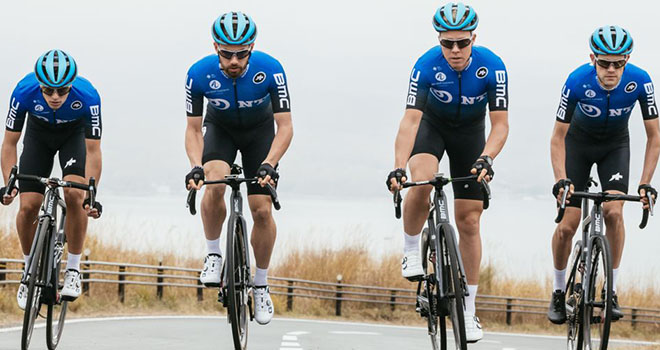 Team Dimension Data, who has been on the World Tour for 4 years, will change to NTT (NTT Pro Cycling) team next season. Although the name has changed, it has not changed much because of Dimension Data Affiliated with NTT Corporation. Recently, at the press conference at the NTT headquarters in Tokyo, the team announced new clothing and a lineup for the next season.

The color of the cycling team kits has abandoned the previous white and changed to blue and black to match the NTT company culture. The top is mainly blue. The gradient design popular in some teams last year has been adopted. The shoulder and hem have been gradually changed to black.

The color of the new NTT kit is particularly similar to that of the former Sky Team. The NTT logo is prominently displayed on the front chest and back. Except for the name change, the sponsor has not changed. The team uniform is still provided by Assos, the equipment sponsor is BMC, and Qhubeka, which has cooperated for many years, is also continuing.

The NTT team will continue to support the Qhubeka charity project in 2020, and the pattern representing the hand of Qhubeka will be printed on the team uniform. Qhubeka has recently donated 10,000 bicycles in Africa to help children in Africa ride bikes to learn, saving them the pain of walking to school for long distances.

In terms of team lineup, there are currently 26 drivers publicly available. After Cavendish’s transfer to Bahrain-Merida and Mark Lenshaw retired, Nizolo and Hagen will become successors, and Walshay will be transferred from Sunweb Germany also has a good sprint ability. In the overall results front, Mainchez is the greatest hope, coupled with Kluyzig, principal, etc. According to a certain degree of competitiveness. In time trials and classics, European champions Campenarth and Valgren can also lead the way.