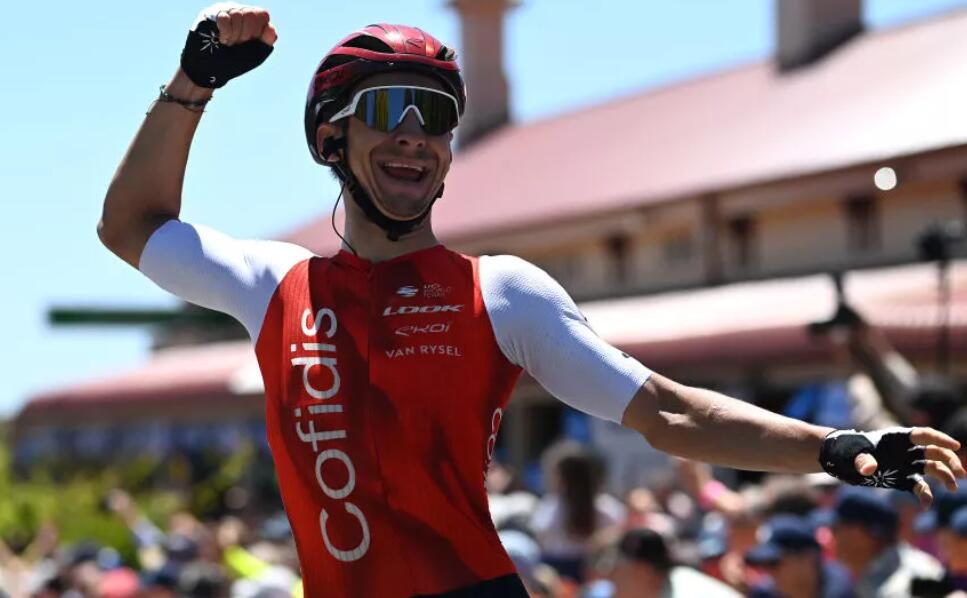 Coquard (Cofidis) took his chances on the uphill course at Willunga and ran far, teeing off first into a headwind before finishing ahead of Alberto Bettiol (EF Education – EasyPost) and Hugo Page (Intermarche-Circus-Wanty) Race reduction beam sprint.

Kocal has celebrated many victories since turning professional with Europcar in 2013, but this is his first WorldTour title and the 30-year-old was elated as he spoke to the media from behind the podium.

“I’m very happy to win my first WorldTour race,” he said. “Ten years ago, I waited for this win, I think before this win, I won 49 or 48 races [before] but never [at] a WorldTour.

“I’m very happy. It’s my first goal of the year, to win in the WorldTour and [to do so] before the final in January, it’s perfect.

“I took the opportunity today and it was perfect.”

Michael Matthews maintained the points lead but admitted he was legless in the final as his Jayco Alula team excelled in a 133.2km flat race that saw peloton battered by crosswinds.

“After my own performance yesterday, I had high hopes for today,” Matthews said after finishing sixth. “Unfortunately the legs weren’t there. I struggled most of the day, really trying to cash in on some of the sprinters who missed the front set in the crosswind, but was fighting myself all day .I wasn’t good enough today.”

Caleb Ewan and his Lotto Dstny leader Jarrad Drizners competed against an exhausted Australian national team, which also had no match for Coquard’s firepower on Saturday, finishing 10th.

“He’s really good at the uphill finish like this,” Ivan said of his rival. “He’s a small sprinter like me and it’s going to be hard to close the gap if he can jump.

“I kind of came on and saw how far he was ahead and kind of knew the game was out there.”

The stage is Ewan and the sprinters’ final chance at the Tour of Australia, which ends on Sunday with a run from Unley to the 112.5km finish at Mount Lofty, where the winner will be decided.

Ivan didn’t miss any of the fourth stage, but was out of place in the final.

“It’s really an ending where you need your teammates,” Ivan said.

“It was a big headwind; we had to really take a gamble and sit at the back and get drowned out there easily. It took a lot of work to get back to the front, but to be honest, it kind of put me off. Nope, and then I was fighting for a spot again, with teams coming from all directions.

Vine’s upward trajectory in the WorldTour is getting faster and faster after he performed well in his first stage with new team UAE Emirates.

The 27-year-old made sure he didn’t get caught in the crosswind and he and his team took the lead in the race. Vine is 15 seconds ahead of Simon Yates (Jayco Alula) and Pello Bilbao (Bahrain Victorious), who are second and third respectively in the overall standings heading into the fifth and final stage.

“There’s a lot of pressure,” Whan said of the stage. “At one point I was like, ‘Oh, we’re going to have an easy day.’ I was happy, smiling, waving to some families on the side of the road, and then it was 45 kilometers and we drove to the end.

“It was a very tough day. A lot more calories than I planned, but still good. We had an amazing team, I think we had six people in the front row helping me, and there were clear instructions in the car. All round The communication is excellent.”