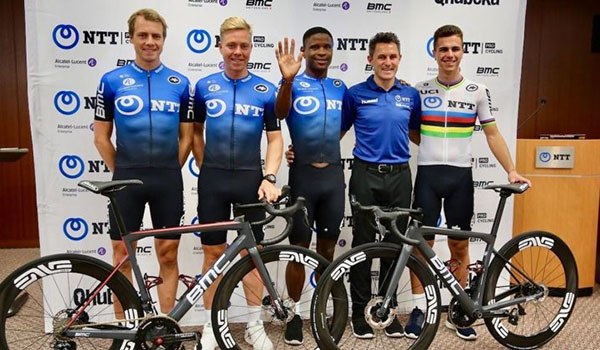 There are currently 19 UCI teams confirmed by UCI next season. Compared with last year, Israel Cycling Academy and Cofidis Solutions Credits are two new teams, the former of which is through acquisition Katyusha team license was entered. The sponsors of each team will not change much next season. At present, only Bahrain Merida, Dimension Data, Astana, Movistar, Israel Cycling Academy have slightly adjusted.

Due to McLaren’s capital injection this year, Merida, who has been a sub-title sponsor since 13 years, will retire from the second tier next season and will no longer be a title sponsor. The team will also be changed to the Bahrain McLaren team (Bahrain-McLaren). However, Merida is still the team’s equipment sponsor, providing drivers with the comprehensive model Scultura, the aerodynamic model Reacto, and the time trial Warp. In addition, the team’s wheel sponsorship has also changed from Fulcrum to Vision, and Le col has replaced Sportful in clothing.

Team Dimension Data was renamed NTT Team. Since Dimension Data is a subsidiary of NTT, this name change can also be regarded as an internal adjustment. In addition, there are no major changes. BMC will continue to provide equipment for the team.

After the three-year contract expired, Astana announced that the team will no longer renew the contract with the Canadian brand Argon 18. Recently, the team released a confirmation message and has signed a cooperation agreement with the Italian brand Wilier Triestina, which will use its Wilier 0 SLR and Wilier Turbine Two major models entered the battle.

Due to the conflict between Endura and UCI regulations, the Scottish brand withdrew from the sponsorship of the Mobile Star team. At present, the team has signed an agreement with the Italian brand Alecycling. The color and style of the new Movistar cycling kit will also be announced at the press conference in Madrid on December 19.

Israel Cycling Academy has signed a one-year cooperation agreement with British bicycle brand Factor, replacing the previously used De Rosa. Factor sponsored the AG2R team in 17 years, and was replaced by Eddy Merckx. Now it is again on the World Tour, providing the team with a comprehensive O2 vam and aero model One.